I’ve talked about this so much over my veterinary years, I feel like I could have written a book on the subject. 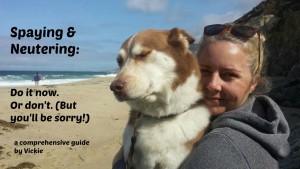 All kidding aside, let’s get the usual disclaimer out of the way: I am not a veterinarian and nothing I say in this blog should ever substitute for advice from a real medical professional.

Okay, so here we go…the decision to surgically alter your dog is a big deal. It’s done under general anesthesia and, for females especially, it’s a major surgery – a total hysterectomy, in fact, just like us human females may have to get someday, which is another reason to baby our sore girls post-op! (I got your backs, bitches.)

If you adopt a dog, odds are he or she will be handed over freshly spayed or neutered. So owners of rescues rarely ever have to face this issue.

But if you get a puppy from a breeder, or a rescue from a group who didn’t have the funds to spay/neuter, it’s a whole different ball game. Should you spay/neuter right away? Does your breeder stipulate something about it in your contract? (I’ve found you won’t find more opinionated people about when to spay and neuter than breeders, who have a financial stake in turning out dogs without health issues that could even vaguely be linked to an early spay/neuter. Way more opinionated than even veterinarians, in my experience, which always struck me as odd. But that’s another blog.)

Further, should you spay and neuter at all?

Following are all the things I’ve come to learn, from doctors, books and just plain old experience –  and I’d like to share. For all you spay/neuter aficionados out there, the doubters, the naysayers, the worrywarts, the staunch proponents and opponents, the ones who wonder if their male dog will ever forgive them – this one’s for you.

Why should I spay or neuter my dog?

I believe the decision about whether to spay or neuter really comes down to lifestyle. With a dash of health intervention. Why do I bring up lifestyle first? Because – to keep it perfectly real and one hundred, as the kids say – I don’t think health is really the main reason to spay and neuter (although there are a lot health benefits I’ll go into later). The way you want your dog’s life to be is the real tipping point here. Let me explain.

The fact is, if your dog is going to come into contact with other dogs, for everyone’s safety (including yours) he or she really should be altered. And by “contact” I mean dog parks, daycares, kennels, walking down the sidewalk, even your neighbor’s backyard – if you want your dog to be social with other dogs, minimizing the sexual part of their natures is key. Why? 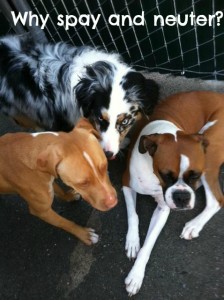 For social dogs, you’d be wise to spay and neuter:

– so they don’t reproduce and you have an unwanted litter on your hands (if you think you want puppies, I think unless you are a serious breeder dedicated to upholding the standard of a beloved breed, this may be a short-sighted decision. For every friend you find to take one of your dog’s puppies, that’s another potential home taken away from a shelter dog who already exists. Add to that the time and money it takes to raise a litter – it’s not something that should be entered into lightly. It’s not something that would be “cute” or “show your kids the miracle of life.” Don’t breed if you don’t know what you’re getting into! Because if you do, your puppies may be the ones who end up at the shelter.)

– so they don’t fight. Whether it’s an intact male being too aggressive, to other dogs targeting an intact male because they feel threatened by him, to dogs competing over an eligible female, intact dogs end up fighting in one way or another. Trust me, they do. I’ve seen it. (My boss Jacque has a good analogy for this: imagine your intact male dog entering a group of other dogs sticking up his middle finger to everyone. Flipping the old bird – of course, you’d have to imagine he could anatomically do that, which is dubious. But that’s really how an intact dog comes off to the other male dogs. And no good play session ever started with, “Hey, smell that? I’m bigger and badder than you. So… f*&k you. Want to play?”)

So the first question I would ask yourself when debating the spay/neuter issue is: what do I want my dog’s life to be like? Is he going to be with just humans all the time or do I want the opportunity and ability to take him to the dog park, walk him safely down the sidewalk or drop him off at daycare? If you do, spaying and neutering is really the only way to ensure he can enjoy these activities safely.

There are other behavioral benefits to spaying/neutering that also make your dog have a safer lifestyle and – well – more fun to be around.

– neutered males exhibit reduced humping (imagine how maddening it would be to have all these sexual urges and no real outlet – another reason, I think, it’s more humane just to go ahead and lessen that urge for them).

– neutered males are less likely to escape and roam (did you know the majority of dogs who are found dead along highways are unneutered males, wandering and looking to mate?)

– spayed females don’t get their periods (when I was a kid I had to put a pad on my Golden Retriever Penny because my parents weren’t big on spaying and neutering – what can I say; it was a different time – and let me tell you it is not fun).

What about the health stuff?

The other consideration in spaying or neutering is for the dog’s health. This is where it gets a little tricky because there are pros and cons on both sides. As with many medical concerns, this issue is still being studied. I’ve had veterinarians say there’s no reason not to spay/neuter as young as eight weeks; some say wait until 6 months; others say wait until 18 months for the giant breeds. I’ve heard some vets say all three over the course of many years. And to their defense, the best age is really not conclusive. But we must start somewhere, so let’s start with the benefits. 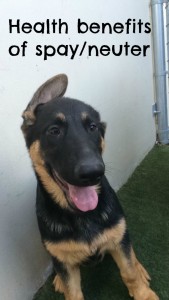 – spayed females won’t develop uterine infections, uterine or ovarian cancers and have a much lower incidence of breast cancer.

– neutered males have reduced occurrence of prostate disorders, no testicular cancer and less incidence of peri-anal fistulas (if you don’t know what this is, I’m not going to tell you about it because the world will look nicer to you if you never find out).

The flip side is that there are some health concerns that have risen in recent years that make it unclear what the impact is of spaying and neutering to your dog’s health. And further, how to calculate the perfect age to perform the spay/neuter to avoid these pitfalls. Basically, all the concerns have to do with depriving your dog’s body of their hormones and the impact of their absence on their bones, joints and general health. 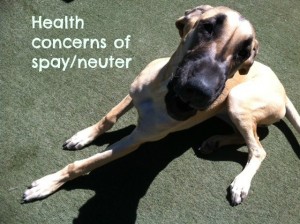 – obesity: altered dogs tend to be less active and put on weight. However, I counter that this is easily controlled with diet and exercise intervention from us humans. (And dog parks and daycares – the kingdoms for altered dogs to romp and mingle – are great places to burn off those extra calories! So I dismiss this objection wholeheartedly.)

– cancer: even though removing the sexual organs can help your dog avoid many kinds of cancer, there are other cancers that some veterinarians think may be a bigger factor for dogs who are spayed or neutered “early” (“early” being under 14 months of age.) However, the studies associated with these findings could not link the cancer directly to the early neutering since the kinds of cancer in question were already risk factors in general. So I call this one a draw. Mainly because I’ve found cancer to be a real inevitability for any pet owner. Generally, if pets live long enough (thanks to your excellent care, of course!) they’ll get some kind of cancer. That’s just how it goes. So I don’t think this should dictate your decision to spay/neuter at all, really.

– Hypothyroidism: there has been some research showing an increased incidence of hypothyroidism in dogs spayed/neutered early. But this condition is easily treated and may occur anyway. So I don’t think this concern in any way outweighs the benefits of spay/neuter.

– Joint issues: this is the only health concern that really pauses me in my “go ahead and do it already!” campaign to spay/neuter. I can see such a direct link to growth and hormones, so it’s hard to ignore that an early spay/neuter could really hurt your dog’s skeletal development, causing dyplasia of the hips and elbows, ACL tears and knee luxation – all very common ailments among dogs and ones that really affect their ability to enjoy their life (and their owner’s ability to pay their mortgage.) To this concern, I say consult a vet about what kind of dog you have and what they think the best age to spay/neuter would be. In fact, consult a few vets. But generally, the bigger the dog, the longer you should wait. So if you have a teacup Yorkie, relax. If you have a Great Dane, be vigilant in your research before deciding what age. But still, I recommend moving forward with the spay/neuter at some point in young adulthood before the behavior issues you experience far outweigh any safety measures you think you’re taking to save your dog’s joints.

(At WOOF, have a few intact adolescent males and females waiting to get their growth in before being altered, and we allow for that as long as their behaviors stay safe in group.)

Ask your vet about the health ramifications of spaying and neutering, but don’t worry too much about it. Dogs are meant to be together, and the truth is they’re better together when they’re not trying to mate with each other. If you have philosophical concerns about it being “unnatural” to alter your dog surgically, may I counter how “unnatural” it was to take canines out of the wild and make everything from Mastiffs to Dalmatians to Teacup Poodles out of them. Domesticated dogs no longer operate on the plane of natural.

They operate on our planes – human planes. With beach days, long hikes and cuddles with their daycare friends. Their main job is no longer to reproduce – we humans have taken that initiative from them and tuned it to our own purposes.

So get your dog, do your research and make the best decision you can. Not just for you. 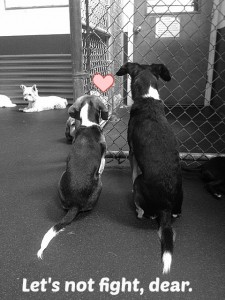