During the ongoing COVID-19 pandemic, the staff at WOOF is following all CDC guidelines and our employees are wearing masks. In addition, we will be utilizing our valet-only service for drop-off and pick-up until further notice. Please stay in your car and text 510-410-7217 when you arrive to pick up your dog.
Skip to content Menu Close

All around WOOF last week, people have been asking: Where in the world is Jacque Preble?

I’m talking aboutÂ Jacque Preble, owner of WOOF. She was missing all last week helping with her favoriteÂ animal charity in Mexico, Sayulitanimals.

You may have spotted some clues around the WOOF office that foreshadowed this trip.

A donation basket on the front desk: 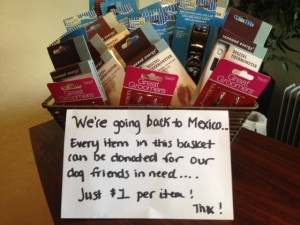 Even a former Mexican native wandering around, who Jacque brought back from her last trip: 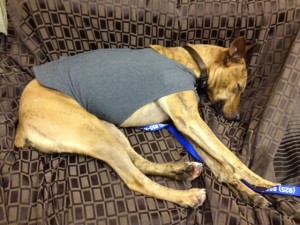 If you’ve met Pancho, you know we’ve been working on easing some behavioral issues with him. (Hence, the Thundershirt you see him wearing above.) He has separationÂ anxiety that still plagues him, but we’re working with a trainer and veterinarian to getÂ it under control.

And even though it hasn’t been all smooth sailing for Pancho, he’s such a sweetie and we’re pretty sure he’s enjoying his new American lifestyle. 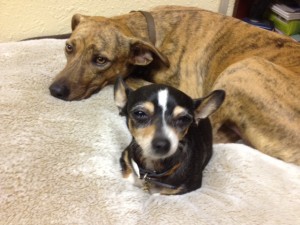 Hanging out on the bed with Olive Preble… 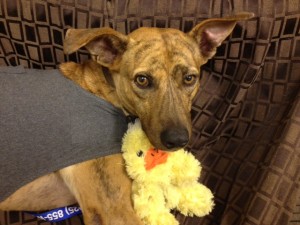 Enjoying some of life’s little luxuries.

We wanted to share Jacque’s workÂ with Sayulitanimals because many of you were kind enough to donate to the cause and we’d like to show you whatÂ your money went toward. (Plus, they’re fighting an uphill battle down there and can use all the additional help they can get!)

First, a little about Sayulita, Mexico. 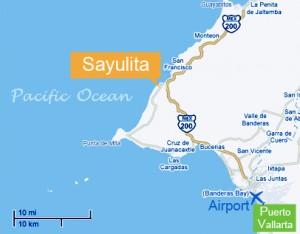 Located 40 minutes north of the Puerto Vallarta airport, Sayulita is a fishing village that has become a recent vacation/ rental hotspot for its quiet atmosphere. (No mega-resorts here as of yet…)

For example, this is still a pretty common sight in Sayulita. 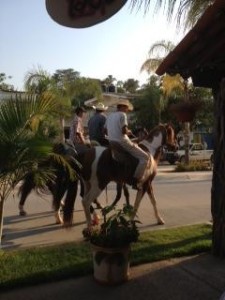 She found the streets to be overrun with unwanted animals. The locals were overwhelmed with growing packs of dogs and cats. Out of a lack of education and severe desperation, some townspeople threw poisoned meat onto the street, tossed litters intoÂ the riverÂ or tiedÂ up dogsÂ to starve and slowly die alone.

An animal lover, Sara adopted a street dog named Esmeralda, who became a sweet and loving companion. She decidedÂ to make a bigger difference, startingÂ a small organization out of her home, which eventually grew into Sayulitanimals. The first year, they neutered 360 animals, found homes for 40 and found foster families for 30 more.

Not bad for a home-grown rescue group!

The locals began to see Sara and her group of volunteersÂ as allies. Through their help and education, they began to see the dogs and cats in their streets as friends instead of nuisances. 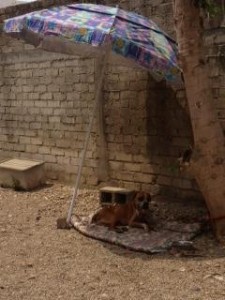 A street dog awaits his turn to be neutered at Sayulitanimals.

In late 2011, Jacque was planning a trip to Sayulita but was feeling “bah humbug” around Christmas because she felt she had so much while others had so little. She decided to see if there were any animal rescue organizations in the area that needed supplies, her plan being to get together a donation drive at WOOF and take it with her for needy dogs and cats.

It was quite the successful drive! (Thanks to our wonderful WOOF clients.) 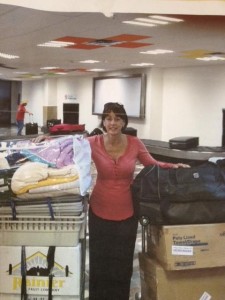 Jacque ended up bringing six boxes of supplies – filling Sara’s wish list and then some.

While down there, she found out about Sayulitanimal’s quarterly spay-neuter clinics. She found out that every three months, a volunteer veterinarian and technician fly out from CaliforniaÂ for three straight days of neuter surgery at no cost to the villagers.

Jacque booked her next flight before she even returned home for the May 2012Â spay-neuter clinic.

So that’s where Jacque was last week – helping with animal recruitment and surgery recovery!

Here she is posing with one recruit, brought in on an extension cord leash. 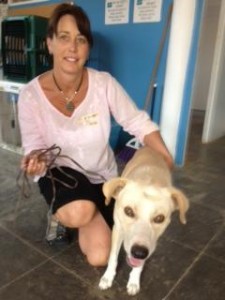 Â Jacque sent us photos all week, documenting Sayulitanimal’s progress. Just by neutering these little guys, so many future unwanted liters will be eliminated! 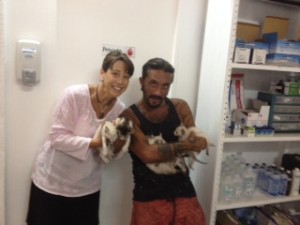 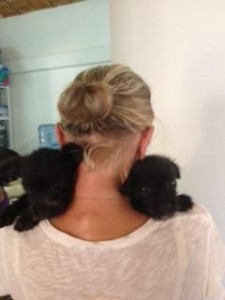 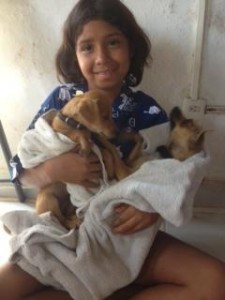 A Sayulita local girl helping out.

Getting as many dogs and cats safely operated on in three days requires 10-hour-plus shifts, lots of towels and some keen organization.

1. Find the patients in need! (Their transportation to the clinic can be quite interesting…) 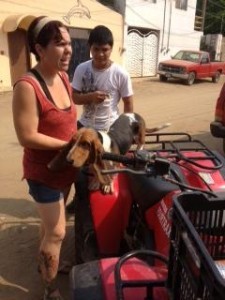 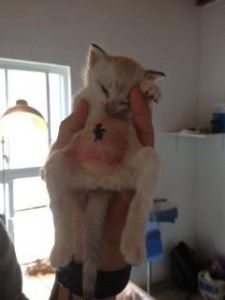 (no pictures of this but you can imagine…) 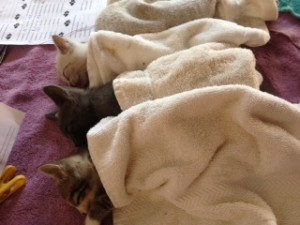 The neat little row allows them to be monitored easily and stay warm while recovering from their anesthesia.

This little male, for example,Â is up for adoptionÂ and only slightly confused as to where two parts of his anatomy went. 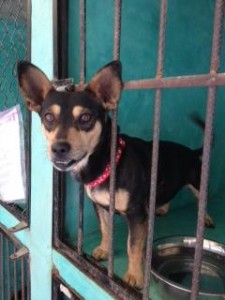 All in all, the group spayed and neuteredÂ an average ofÂ 50Â animals per day. Jacque said, althoughÂ it wasÂ exhausting, it’s one of the most satisfying things she’s ever done.

Here she is with founder, Sara. 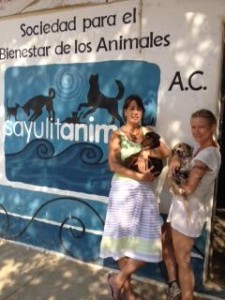 And she really, really loved handing out allÂ your WOOF donations, of course. 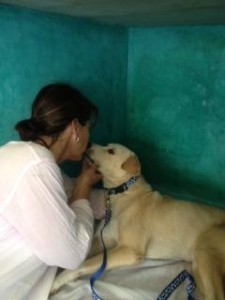 Getting a thank-you kiss for a donated leash and collar…

Watching this after a hard day’s work each night wasn’t bad either. 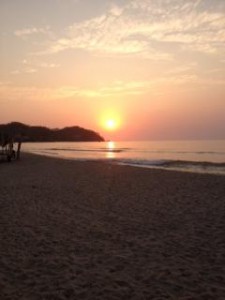 So a big THANK YOU from Jacque and everyone in Sayulita for your donations. If you’d like to learn more about the organization, go to their web site.

Or you can help nowÂ by:

Search the adoptable dogs and cats by clicking here

Jacque is going back to Sayulita September 30 through October 4, so if you’d like to donate through WOOF, contact us here.

Â Welcome back, Jacque. We have a sunset here too – just look at our wall every night.

We think it’s almost as beautiful. 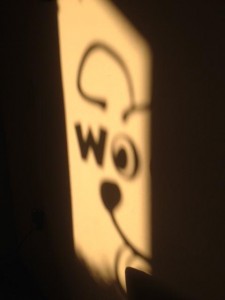